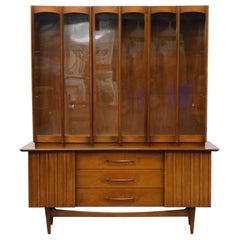 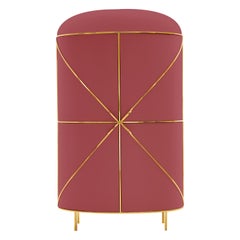 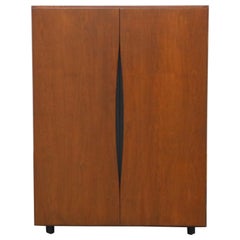 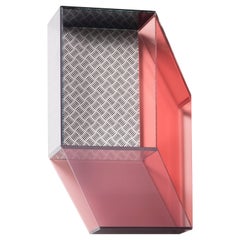 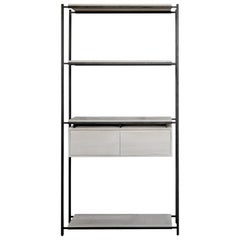 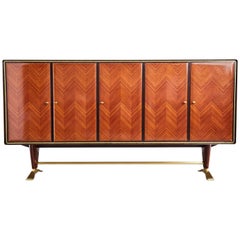 Contemporary Cioccolata Bookshelf in Aluminium by Altreforme
By Aziz Sariyer
Located in Milan, IT
Cioccolanti is a bookcase whose taste is refined, sweet and incredibly unique. It envelopes in its symmetric folds the magic pages of a good book, the scent of the most beautiful flo...
Category

Green Finn-Ply Cabinet with Bronze Pulls and Turned Bronze Legs
By Chris Lehrecke
Located in Bangall, NY
This version of the Classic Finn Ply cabinet, in the brand new shade of Green! This cabinet features a center section of drawers on wooden slides, and two sections with doors and adj...
Category

Mahogany Display Case with Glass Lions, circa 1910
This long display case has decorative floral legs, brass lion ornamentation, beveled glass top, and four mirrored panels which slide down in the back to provide access to the content...
Category

22 Foot Oak Cabinet Unit with Mirrors
This large 5 section cabinet is perfectly crafted to showcase any type of display. Symmetrical repetition of three drawers with larger square cabinets in between leads way to a total...
Category

Art Nouveau Cast Iron and Wood Adjustable Book Shelves
While these brackets look at first glance to be an Art Nouveau, details in the piece reveal it to also be designed with Ionic style elements. Lamb’s tongue detailing runs up along th...
Category

Gothic 16th Century Wood Chest
Gothic oak chest from 16th with paneled lid and 4 linenfold panels in the front, circa 1500-1530 From The Low Countries (Netherlands). In good original condition, with minor w...
Category

Mastercraft Brass Commode Dresser with Chinese Character Brass Pulls, circa 1970
By Mastercraft
Located in Los Angeles, CA
Rare, highly sought after, and of incredible quality, this brass dresser is by Mastercraft, designed and produced in the 1970s and is in excellent well cared for condition. Soft pati...
Category

Oak Display Cabinet with Back Mirrors and Storage
This handsomely crafted display cabinet features 5 back mirrors, 5 drawers underneath and stunning oak. The mirrors rest upon sliding door panels that slide down and offer easy acces...
Category

Oak Display Cabinet with Back Mirrors and Storage

Monumental French Vitrine in the Style of the 18th Century
Massive, finely carved beechwood, colored and gilt gilded. High-rectangular, half-round and one-door cambered body, glazed from three sides. The entire showcase can be dismantled. On...
Category

Monumental French Vitrine in the Style of the 18th Century

Wilhelminian Style Cupboard with Small Green Glass, circa 1880
Here we offer you a truly incredible Wilhelminian cabinet with the finest epoch-style styling features. Massive oak manufactured circa 1900 impresses among other things by its car...
Category

Set of 2 Mid-Century Modern Bambu and Rattan Bed Sideboards, circa 1960

Oversized Oak Vestment Top Cabinet
This solid golden oak turn-of-the-1900's vestment top cabinet is humongous. The cabinet has a single center door (20" by 35") that is flanked on each side with three 15.75" wide by 3...
Category

Dry Bar in Blackened Laser-Cut Steel Frame with Black Oak Slats and Leather Top
By Klein Agency
Located in Los Angeles, CA
Be it in the gentleman’s corner of your apartment or centre stage in your living room, this contemporary Dry Bar in its simplicity, serves as a humble vessel for your most precious l...
Category

Late 19th-circa Early 20th Century Large Oak Farmhouse Table, circa 1890-1910
About A large Oak farmhouse table with distressed base that can be used as a dining table or large console. The top is framed out and the base is constructed using draw mortise an...
Category

Oak Standing Desk
This gorgeous standing desk is made of lovely oak and features two large drawers. The richness of the wood grain on this desk needs to be seen to believe! Measures: 48” wide x 33”...
Category